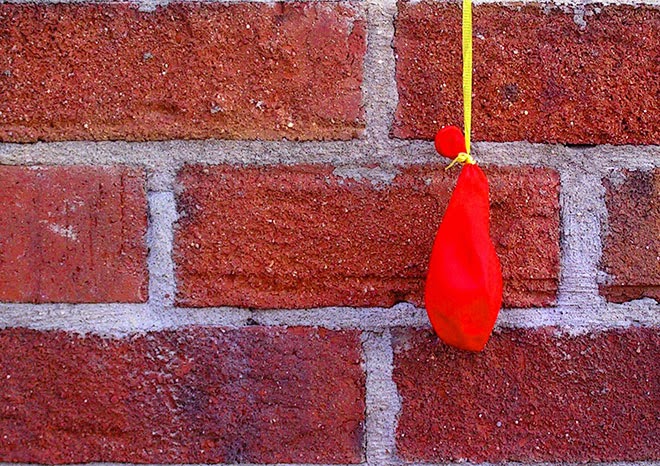 Customers always ask how long balloons last. This is sometimes difficult to answer as many variables can impact a balloon's float life. However, the answer is essential to party planning.

Helium-filled balloons float due to the simple fact that helium is lighter than air. Because latex balloons are porous, helium slowly seeps through the pores. As less helium is left in the balloon, the balloon decreases in size and simultaneously floats lower to the ground until there is no longer a sufficient amount to keep the balloon afloat. The typical indoor float life of 12" latex balloons is 10-12 hours. If outdoors, this float life can be expected to decrease by at least half.

Part of the reason a balloon doesn't float as long outdoors is due to temperature. The hotter it is, the more susceptible the balloon is to popping. In contrast, balloons typically contract in extreme cold, which decreases the size of the balloon.

Ceilings that are texturized or have abrasive surfaces can also decrease the overall float life of balloons for obvious reasons. As AC units kick in inside a building, balloons left to float on the ceiling will shift and move around. This movement in conjunction with jagged surfaces can pop the balloons.

Foil balloons are usually constructed of foil and polyester materials and are virtually airtight. For this reason, foil balloons can float much longer than latex balloons. The necks of foil balloons are self-sealing. They are designed to allow air in, but not allow any out. As a result, a foil balloon can float for weeks. However, a seal will eventually succumb and these balloons will also slowly deflate and begin to float at lower levels.

If you're planning a party, it's important to keep a few things in mind. First of all, know the average float life of the balloons you're using. This will help you determine how far ahead of the event you can begin inflating your balloons with helium. Inflating too far ahead of time may lead to an event where guests walk in to a hall with balloons on the floor.

Tips:
Know Your Venue
Unless you plan on tying your balloons down to a weight, tables or chairs, you'll want to make sure the ceiling is conducive for balloons.

Need More Time? Make it Last.
Hi-Float is a great balloon accessory which increases the float life of latex balloons. It has a gel-like consistency. To use, pump the mixture into an uninflated latex balloon, massage the balloon to evenly coat the interior and then inflate as usual. This creates a barrier between the helium and the pores of the latex, keeping more helium inside the balloon longer. Please note that Hi-Float is not intended for use with foil balloons.